As a Councillor you meet new people every day. Some are fun, some are interesting, quite frankly some are a pain.

But every so often you meet someone really special. Someone with a special gift. 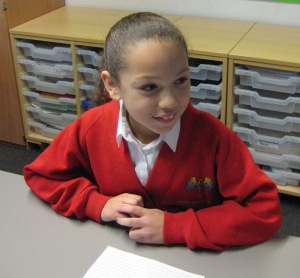 It’s brilliant being Chair of Governors at Wembley Primary. It’s always so uplifting to visit the school and to see the kids learning and growing.

I visited 5w a few weeks ago to talk about their Natural Disasters projects and to sit in on their creative writing lesson. I saw lots of wonderful work, but when Jasmin read out her writing, I was quite simply stunned.

Jasmin writes absolutely beautifully: she has tremendous vocabulary, structure and delivery. But more than that, she writes with an instinctive poetry that moved me almost to tears.

“Nonchalantly, almost melancholy, the past sell by date man stooped over to his composing contraction. He slumped himself into his stool (which fitted him like a glove) and began to compose.

Washing over him, memories flew like they were water and he was the sand in the sea. Flowing, one by one his memories unravelled themselves from the knots in his mind. Each memory a different emotion. A different colour.

Jennvive. The apple of his eye. Each other’s open blue sky. The daffodil of his life. His blissful time. The rock she had lent on. He almost felt her breath brush against his cheek. Her kiss goodnight.

It was lull of war, hate, and vivid Scarlett. When he glances at his shoulder he can still make out the misty, haze of the Red Cross. Remembering the day the sergeant died, was like the day you got your ear pierced.

He recalled thinking why do bad things happen to good people?”

Jasmin is 9 years old. I’d have been very proud to have written that when I was 15. And I got a double A* at English GCSE.

Jasmin and her classmates were writing about The Piano. This is a beautiful short film, but it’s not a patch on Jasmin’s interpretation.

“I love to watch my grandson play,

He visits my house every day.

My own little kin Gwendolyn,

Next in line, they live together,

Though I always forget.

He plays with my hobby-horse.

The hobby-horse of my childhood.

Despite me giving it away,

It will be in safe hands forever and a day.

Riding his granddad’s hobby-horse Jake (his grandson) stopped in his tracks. Glancing, at his relative smashing the polished keys on his glistening, gorgeous black piano, Jake laid the hobby-horse, Chestnut, on its side. Anxiously, Jake shuffled up beside his granddad, where there were now two groves, and he tapped a few keys, until the end of the melody.

When the last note rolled over, Jimmy and Jake pushed down the white key. Symbolising the old and the new generation. Jake thought to himself: like the yin and yang.

I know I’m not very good at keeping diaries, so this will be my first but last entry. I love my granddad. More than the world. I love his music. I love his style. I love Jimmy.

I just think this is stunning writing.

But Jasmin is not alone. There are so many wonderfully talented pupils at Wembley Primary.

Shyam’s a good example. This week he taught Barry Gardiner MP about the Fujita scale. Barry is an intellectual powerhouse. In all the months I’ve worked with him, this is the first time I’ve seen him not know the answer to a question!

I hadn’t a clue either by the way. Neither did I when Shyam asked me how fast tornadoes spin! 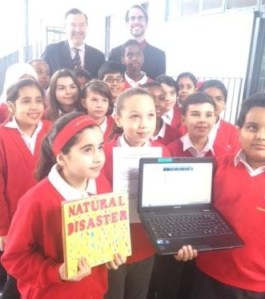 There is so much talent in our schools.

And there is no correlation between that talent and privilege.

Wembley Primary is not in a wealthy area. A third of our pupils receive Free School Meals – twice the national average. Family problems, especially domestic violence, are widespread in our surrounding community.

But we produce children as talented as anyone.

I can completely understand the anxieties of parents who turn to fee-paying or selective schools. But these anxieties are all too often based on misconceptions. The media still peddle redundant clichés about “bog standard” inner cities schools.

In fact, much of what attracts parents to fee-paying or selective schools is flourishing at Wembley Primary.

Far from being bog standard, we cherish our unique ethos. We have high expectations of all our pupils and unashamedly celebrate success. We have smart uniforms – and even prefects.

We also have a deep commitment to extra-curriculum activities.

Jasmin attends our creative writing club, plays netball and football, runs, and sings in the school choir. How many schools can match our forty plus after school clubs? How many other schools offer a Greek club?

We are also technologically cutting-edge. We’ve just launched our fantastic Smart Phone App and some of our older pupils use Twitter to research their projects.

Parents needn’t look to fee-paying or selective schools for dynamism, creativity and determination for excellence.

Importantly, as part of this we work with the community, parents and local Council to ensure that our children and their families receive the best possible support. Make no mistake: the Head, staff and Governors run the school – but we do so in partnership with our neighbours. Not in competition with them.

Of course there are absolutely no grounds for complacency. We need to keep raising standards and to keep challenging natural talent.

But let’s take a moment to celebrate the fantastic children in our schools.

Instead of the annual debate over grade inflation and dumbing down, let’s recognise the fantastic work being done every day by both staff and pupils.

We really do have some amazingly talented children in this country. And maybe I’m biased, but I think Jasmin Taylor might just be the best of the lot.

Read her whole story and you’ll see what I mean… 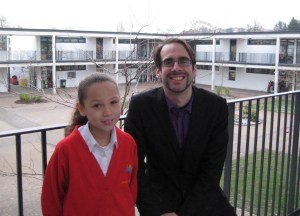 Me and Jasmin at Wembley Primary

11 thoughts on “Every So Often You Meet Someone Special…”