Wow, time really does fly. Incredibly it’s almost five years since I launched this website. I’ve written thirty-odd blogs in that time, but one in particular will always stand out.

I’ve never sought to build a narrative through this blog, but reading over past articles two themes stand out: the importance of social justice and the power of education to build a better world. These two themes really fused in “every so often you meet someone special.”

I’m so proud to be a governor at Wembley Primary School. One day I was enjoying a year five literacy class and out of the blue I was completely blown away. Enter Jasmin Taylor: ten years old and already writing the most beautiful, poetic words…

“Washing over him, memories flew like they were water and he was the sand in the sea. Flowing, one by one his memories unravelled themselves from the knots in his mind. Each memory a different emotion. A different colour.

Jennvive. The apple of his eye. Each other’s open blue sky. The daffodil of his life. His blissful time. The rock she had lent on. He almost felt her breath brush against his cheek. Her kiss goodnight.”

I was amazed. And I was hooked.

Jasmin is a very special young lady. I shared some of her beautiful writing in the blog “every so often you meet someone special” – and it quickly went viral, being read all over the world. I think the sense that someone so young could write such powerful words conveyed a message of optimism and hope.

The hope didn’t just rest in the fact that this young person was so talented, it was also that she came from a relatively disadvantaged background and that she was nurtured and stimulated by her school.

I soon realised that Jasmin was one of dozens of wonderful talents in the school, so my blog became an affirmation of the power of education – and a strong defence of the superb work going on in state schools across the country.

Several years on I stand by every word of the blog – but I also realise that I underplayed one critical factor. Home.

I’m spending a lot of time at Wembley Primary School at the moment and it’s such a joy. So many talented children, so many committed teachers and support staff. But the longer I spend in the classroom, the more I realise the huge importance of children’s life away from school.

Some children show the benefits of reading at home. Some with clear natural talent start to fall behind because their concentration wavers. Others struggle with the necessary discipline of the classroom. There is so much talent, but when it comes to application it can be a very different story.

I suppose it’s stating the obvious to say that home-life is a critical determinant of performance in school, but the obvious all too often gets overlooked in political decision-making.

Breakfast clubs, home school liaison and the wonderful Sure Start programme. All the interventions which can make such an enormous difference in helping those children from more challenging homes – all are being squeezed ferociously as cuts hit the classroom. It’s such a tragedy.

I have a mea culpa too. In showering praise on Jasmin and on Wembley Primary School, I too overlooked the importance of home. In particular I didn’t give enough credit to Jasmin’s utterly committed and inspirational mum. One of my aims in writing this particular blog is to correct that fault.

My other aim is to share some more of Jasmin’s work. 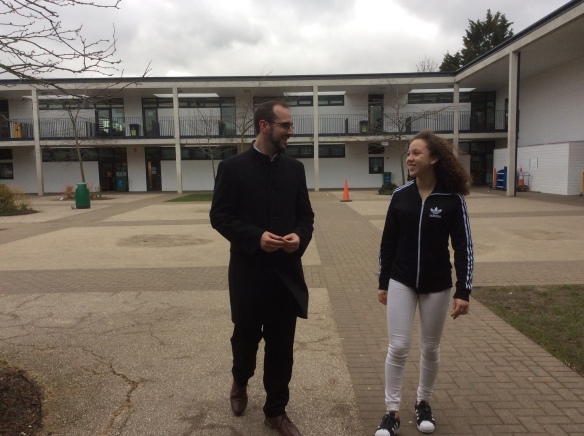 Catching up with Jasmin this month

I caught up with Jasmin earlier this month and it’s absolutely great to see her flourishing in secondary school: secretary of her school council, part of the school social justice council and an athlete with the Thames Valley Harriers who has twice run in the Olympic Stadium. Oh and her writing? It’s even more brilliant.

“How many times have I heard the question “Is she your real daughter?”

I come from a mixed race family. My mum is half Malaysian and half Northern Irish; my Dad is half Jamaican and half Jamaican-Chinese. Both of them are British. I could never truly say I identify as more of one race than the other. But when I explain I always say, “Well I’m British but I’m also…” Why do I say ‘but’? Can’t I be British and mixed-race? Both of these are racial labels I put on myself. But when a stranger puts them on you it is unnerving. Unnerving mainly because their labels put on you are based on stereotypes.

An example of this was as I was on my way home from track and field practice. It was normal for me to get the 220 bus at around eight thirty pm on Tuesday and Thursday nights. It was normal for me to stand facing the exit doors on the left of the wheelchair and pushchair area. It was absolutely normal for me to listen to my music in peace and not worry about other people on the bus. However, it wasn’t normal for me to be directly singled-out by a stranger. It was only this summer when a drunk black man in his late forties decided to fling himself around the bus and shout, “Leave the EU! Make Britain great again!”

To be honest, when things like that happen I try to not pay attention, so I don’t get noticed. When the drunk man started walking towards me I froze. He stopped at the seats parallel to me and started ranting to an African woman. There was only one thought running through my mind, what is the driver doing, and why doesn’t he kick this guy off the bus! The man kept emphasising she should rise up and claim her heritage; be the supreme race and she and him were “better than this”. “Like her!” he yelled.

With every cell in my body I could feel his accusing finger pointing at me. My heart dropped into my stomach and I felt a weird sensation. I was hot with embarrassment, but cold with fear. Look straight ahead Jasmin, I thought, don’t acknowledge him.

Unfortunately he continued, “You, you have a black dad and a white mum, innit?” I did not reply. “You still black though. Look at your hair, curly black hair. You can claim it with us. Embrace your black heritage.” I did not reply. I was mortified. Terrified. Petrified. Suddenly the minutes between bus stops turned to what felt like hours. Silently, I was praying he would get off the bus at this stop. Ok, the next one. Eventually I could relax when he got off the bus, only one stop before me. I still let out an audible sigh of relief.

After being racially labeled, you can’t just ‘get over it’. As soon as you notice a label being placed on you, it seems to happen again and again and again. But, is it really that person’s fault? Many times it’s hard to not place a racial label on someone if they have specific physical racial traits. It has been proven that everyone carries racial bias and flash judgments, so can we ever live in a world where people don’t quickly place a racial labels? We will never know.

This is important, because although you may see an aspect of your identity in someone, you shouldn’t assume his or her whole identity. As well as this, in order for you to believe someone is of a certain race, you must have evidence that backs up your belief. But if that person is a stranger, then what evidence are you using to justify your belief? None. You would be using your own racial bias and stereotypes. I believe this is true, and I believe people shouldn’t place racial labels on others.”

Eloquent, thought-provoking and challenging. Just fourteen years old and a truly rare talent. I’m completely star-struck, but there are so many brilliantly talented young people out there, each one a credit to themselves, their schools – and their families.

It’s five years since I launched this website – and it’s been a difficult five years. The world has become more divided, anger has become widespread and has spilled over into hatred.

Hope has never been more important.

My original blog, “every so often you meet someone special”, carried a message of hope: the next generation have an abundance of wonderful talent. I hope that this blog shows that the same generation has the wisdom and courage to build a better future.

1 thought on “Every So Often You Meet Someone Special – Continued…”